Artifact of the month

Leaflet from The Group of English speaking Communists, 1918-1918.

During the Russian Civil War (immediately following World War I), some Allied troops, including American and British soldiers, fought against the Communist forces in Russia. On the American side, perhaps the most famous of these groups was the Polar Bear Expedition (which totally sounds like an Arctic exploration team). 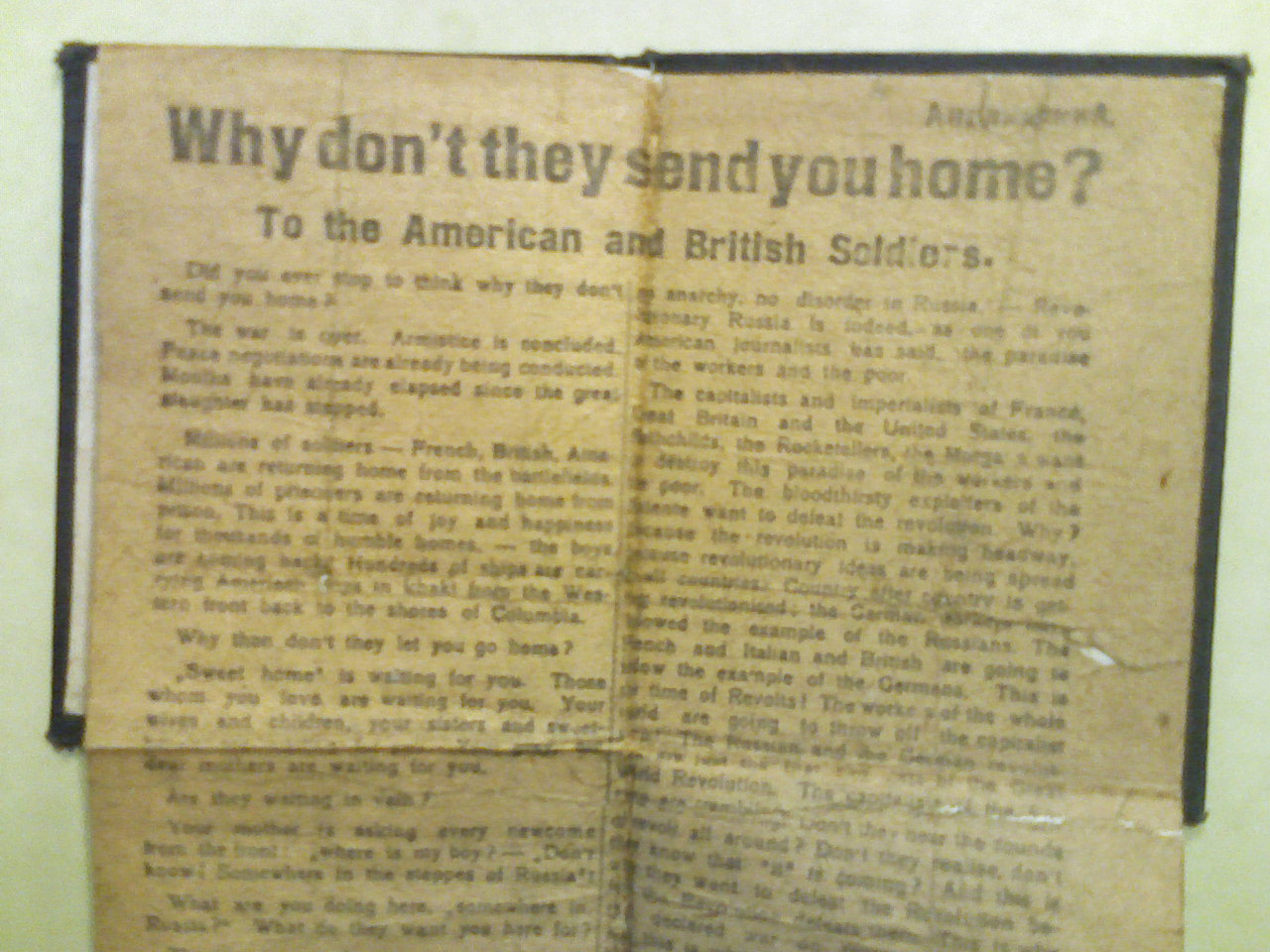 Besides sending the full force of the Red Army against the invaders and their allies, the White Army, the newly-formed Communist government did what Communist do best: issue propaganda. This leaflet, which has been custom-bound in a small folio, was one of many which sought to convince the English-speaking forces to defect.

A full transcription follows, after the jump.

Why don’t they send you home? To the American and British Soldiers.

Did you ever stop to think why they don’t send you home?

The war is over. Armistice is concluded. Peace negotiations are already being conducted. Months have already elapsed since the great slaughter has stopped.

Why then don’t they let you go home?

Are they waiting in vain?

Your mother is asking every newcomer from the front: “where is my boy? - Don’t know! Somewhere in the steppes of Russia”

What are you doing here, somewhere in the steppes of Russia? What do they want you here for?

They have been telling you that this was a war against German autocracy, against German imperialism, against kaiserism. But now there is no more kaiserism, there is no more autocracy. The German workers have arisen in revolt - and they themselves defeated kaiserism. Themselves! - without the help of British and American troops. There is no more imperialism in Germany. The Kaiser and the cruel “war-lords” have fled. Germany, like Russia, is no the land of Revolution. Germany, like Russia, will be governed not by a bunch of cruel masters, but by the people, by revolutionary workers.

Is it true that you have been fighting for freedom and democracy? If this was tru you would have been sent home on the very day the Russian revolution broke out. But instead of home you are sent to the steppes of Russia. Why?

Of course you don’t know all this. Because your masters are afraid to tell you the truth about revolutionary Russia. They are telling you lies about the atrocities of the Bolsheviks. Don’t believe them! There is no disruption or anarchy; no disorder in Russia. - Revolutionary Russia is indeed, as one of you American journalists has said, the paradise of the workers and the poor.

The capitalists and the imperialists of France, Great Britain and the United States, the Rothchilds, the Rockefellers, the Morgans want to destroy this paradise of the workers and the poor. The bloodthirsty exploiters of the [illegible] want to defeat the revolution. Why? Because the revolution is making headway, because revolutionary ideas are being spread to all countries. Country after country is getting revolutionized; the German workers have borrowed the examples of the Russians. The French and Italian and British are going to follow the example of the Germans. This is the time of Revolts! The workers of the whole world are going to throw off the capitalist [illegible]. The Russian and German revolutions are just the first two [illegible] of the Great World Revolution. The capitalists of the world are trembling. Don’t they hear the sounds of revolt all around? Don’t they realize, don’t they know that “it” is coming? And this is why they want to defeat the Revolution before the Revolution defeats them. This is why they declared war on revolutionary Russia and this is why they don’t want to send you home.

Do you realize that in this great battle of Labour against Capital, of Freedom against exploitation, of real Democracy against the fake democracy of Rockefeller and Morgan - you are to fight on the side of your cruel masters against your brethren, against your fellow workers? Are you not workingmen yourselves?

The war is over, but a new war is starting. This new war is the class war. The oppressed of all countries are rising against the oppressors because the war has brought so much [illegible] they can suffer no longer. Do you realize that you are shedding your blood in the interests of the oppressors and not of the oppressed? Do you realize that you are here to defend oppression and exploitation and that you are to give your very lives for the interests of those who are now, after the fall of the Kaiser, the only Kaisers in the world?

Do you want to sacrifice your lives in order that that capitalists may obtain a greater hold on our class, the workers? Of course not.

Demand to go home. Hold meetings in your regiments, form Soldiers Councils, and force your demands on your Governments and your officers. If you are convinced in the justness of the cause of Labour then come over to our side and we will give you a hearty welcome into the ranks of those who are fighting for the emancipation of Labour.

The Group of English speaking Communists.